One lecture this week because of your test on Thursday.

Apparently the minor molluscan groups the scaphopods and rostroconchs haven’t caught on enough in the public consciousness to produce many webpages, so Wikipedia will do fine.  Ron Shimek has a nice webpage introducing the scaphopods. Here’s one of the few videos of living scaphopods in a laboratory.

We’ll get a start on bivalves in lecture and lab. The Wikipedia pages on bivalves and oysters are good, and there is a Wooster touch on each. Here is a nice webpage with some simple anatomical diagrams of bivalves. (A useful page for our dissections in lab this week.) Don’t miss this site on Ohio’s favorite bivalve, the Zebra Mussel. This is a simple index to the common bivalve families, with images which will be helpful in lab. The Monterey Bay Aquarium Research Institute has some good photographs of deep-sea bivalves and other marine invertebrates.

Here is a short and good video summary of some molluscan adaptations. It is well done.

Your second lecture test is on Thursday, November 1. Here is an example: the 2017 second paleo test. Yours, of course, covers slightly different material.

Here is a sample field studies report generously given to us by Alexis. 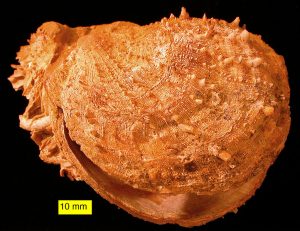 The bivalve Spondylus from the Pliocene of Cyprus.

Climate change is producing an insect apocalypse. Many ecosystems have experienced a profound loss of insect diversity and abundance over the past decades. As budding ecologists you know this has many serious knock-on effects, including loss of pollinators and insectivores. My treasured Joshua trees of the Mojave Desert are dying out because their pollinating moths are disappearing.

We’ve known that the Earth’s inner core is solid from calculations and formulae, but now we have direct evidence of its nature. Solid but a bit squishy. And really hot.

Chemists have found a recipe to build all four nucleotides of RNA in a way that could have happened on the surface of the early Earth. This is a biological breakthrough that could show a theoretical pathway to the RNA World. Very cool.

I’ve given you so much bad news this semester about climate change (and we know plenty of other anxieties going on now too!) that you need a set of charts and maps with how much better we have it than our ancestors.