Remember that we have no or lab on Tuesday because I am at a meeting of the Geological Society of America in Indianapolis. I’ll be giving this talk on Wednesday afternoon. Wish me luck.

We’ll spend Thursday in class reviewing the results of your second test, then finishing anything left over from our bivalves section. Please review the past links. We will then discuss ideas about the evolution of mollusks. The Wikipedia page on molluscan evolution is quite good. Notice our friend HAM at the top. If you want to dive into the weeds on mollusk evolution, check out this Nature paper on phylogenomics. We will simplify!

Your next lab test is on Thursday, November 8. It will go from the bryozoans through the bivalves. 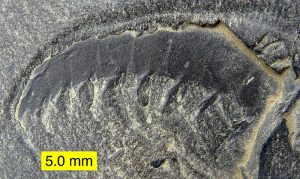 The End-Permian Extinction happened much more rapidly than we previously thought. In fact, from this study, it was geologically instantaneous. Life was doing OK until quite suddenly a tipping point was reached to throw it into catastrophe. Implications, people, implications.

The ornithischian dinosaur Pachycephalosaurus may have eaten meat, according to a recent paper. It has been found with sharp front teeth typical of a theropod. I think this is a stretch, though, because some plant eaters have sharp teeth.

A Cretaceous bird in, you guessed it — China, has its lungs preserved as a carbon film. This is a critical piece of evidence for our theories of bird flight.