The Tree of Life Project has an excellent page on cephalopods; it concentrates on their systematics, but also has good information on cephalopod biology. The Smithsonian has a cephalopod page for professionals and others interested in these creatures. The Wikipedia page on cephalopods is good. There are many pages devoted to fossil cephalopods, such as this one on ammonites of the Fox Hills Formation in north-central North America. TONMO (The Octopus News Magazine Online — who knew?) has an informative page on nautiloids. Here’s a reference page for coleoids. As a bonus, watch a short video of baby cuttlefish hatching. This very cool video of a blue-ringed octopus was posted on the Scientific American site. In fact, YouTube has hundreds of cephalopod videos. Cephalopods — gotta love ‘em.

Your second lecture test is on Thursday, November 1. Here is an example: the 2017 second paleo test. Yours, of course, covers slightly different material. 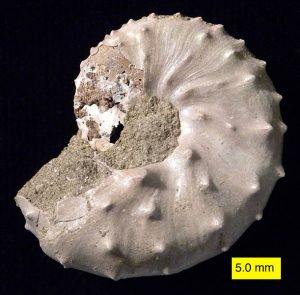 At least one Cretaceous shark (Squalicorax) ate one pterosaur (Pteranodon) based on a chewed-up wing bone. Must have been quite a scene at the time!

Here’s a provocative new idea: Mesozoic mammals went through a “nocturnal bottleneck” since they were easy prey for dinosaurs during the day. The result of our night-time habits is that we lost a genetic toolkit for repairing our DNA when it is damaged by solar radiation. Thus the headline saying we need sunscreen because of dinosaurs. Interesting.

A terrifying essay on climate change is now making the rounds. Grim, grim, grim. Our leaders have completely failed us on the most important issue in our history.

A scientific fight has developed over the earliest fossils. Structures in Greenland have been interpreted as microbial stromatolites 3.7 billion years old. Now a new study suggests that these features are inorganic, not biological. This would mean the earliest evidence for life returns to 3.5 billion year old stromatolites in Western Australia. Hot words have appeared between the two sides. I think the new study has the best evidence, so I would now say the earliest fossil evidence for life is 3.5 bya.