The Wikipedia page on cnidarians is an excellent place to visit first for our gelatinous friends. For systematics and descriptions, you can’t beat the Tree of Life page on Phylum Cnidaria. Check out my favorite hydrozoan, the delightfully-named Velella velella. (I saw these gorgeous animals during my visit to Sicily several years ago.) Here is a great jellyfish video from the Monterey Bay Aquarium in California. Jellyfish have become an enormous ecological problem because of warming seas and changing fish populations. Time Magazine has a good article about the “stinging season” with links to further stories. The Miami New Times has an article on Ten Things You Need to Know About Jellyfish. (Note that urine is not a particularly helpful treatment for a jellyfish sting!) Avoid fire coral, whcih should be obvious from its name. The BBC has a magazine article describing the strangeness of cnidarians, and why they may hold compounds and genes to improve our health. Finally, Wooster Geologist Macy Conrad poses in this post with a dead jellyfish on a French beach two summers ago.

In the coming weeks we will identify the fossils we gathered on our field trip, apply to them several paleontological techniques such as cleaning, cutting, polishing and photography, and then put together a grand paleoecological analysis. We will be greatly assisted by two fantastic websites, one by Alycia Stigall at Ohio University called The Digital Atlas of Ordovician Life, and the other by Steve Holland at the University of Georgia titled The Stratigraphy and Fossils of the Upper Ordovician near Cincinnati, Ohio.

Here is a pdf version of the first 2017 Invertebrate Paleontology test you can use to prepare for the Big Event on Thursday, September 20. Remember that each class is different — there will be some items on this sample test that you did not have in your class. 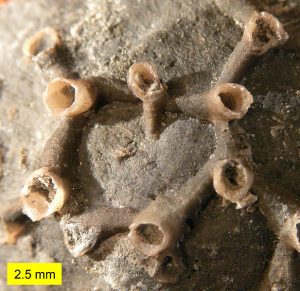 An auloporid coral from the Middle Devonian of northwestern Ohio.

How would you categorize the feeding mode exhibited by this gorgeous nudibranch?

Here is a brand new study on the evolutionary origins of animal diversity. “Our results show that fundamental evolutionary change was not limited to an early burst of evolutionary experimentation. Animal designs have continued to evolve to the present day—not gradually as Darwin predicted—but in fits and starts, episodically through their evolutionary history.”

New coral reefs have been found in deep water off the coast of South Carolina. Note these are in dark waters, unlike the far more common shallow-water coral reefs. These discoveries are important for our calculations of the oceanic carbon budget, among other things.

New evidence suggests that climate changes may have led to the disappearance of our Neandertal cousins about 40,000 years ago. There’s a lesson here!